Chicago’s returning citizens bridge the gap between race and justice 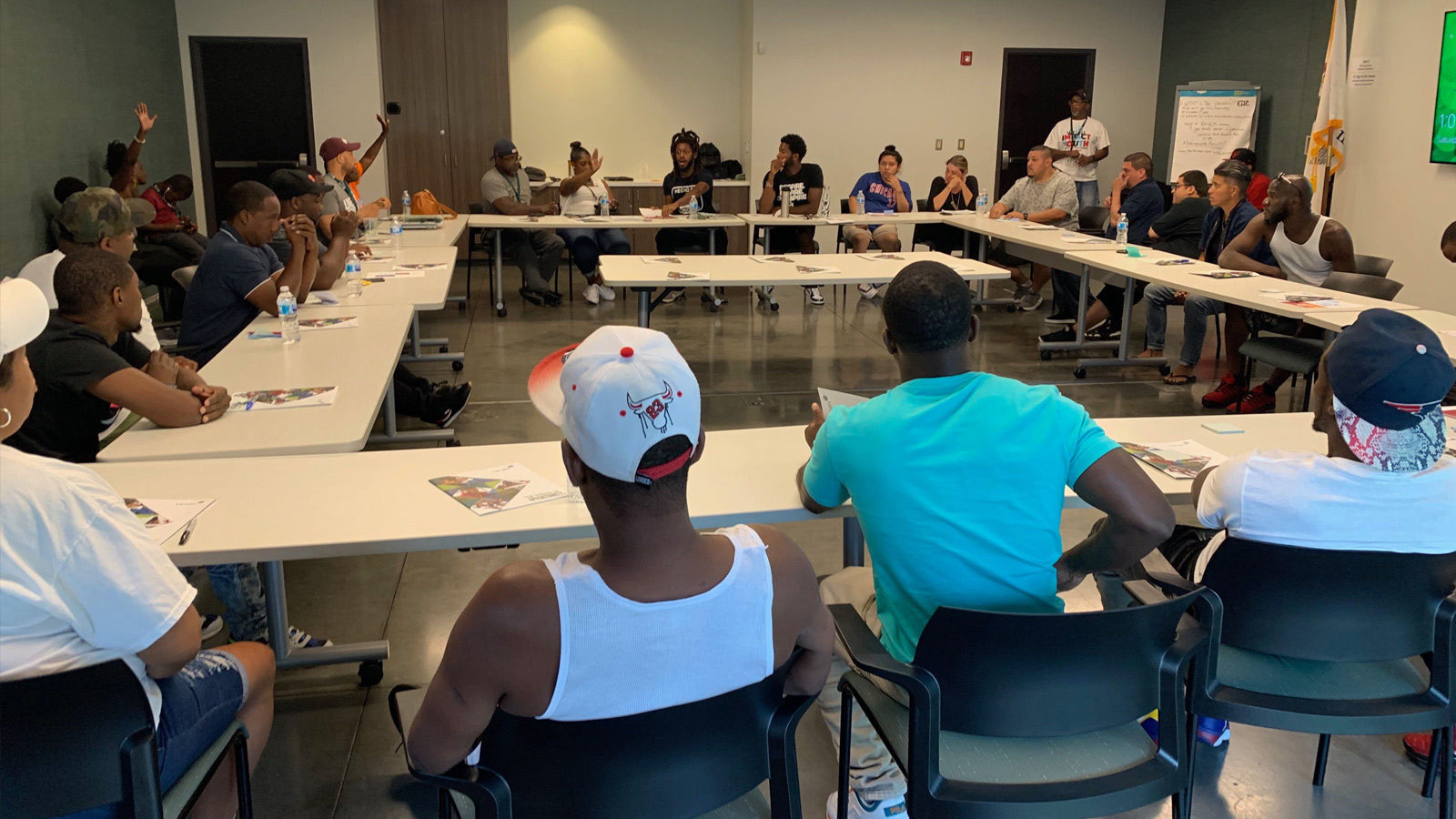 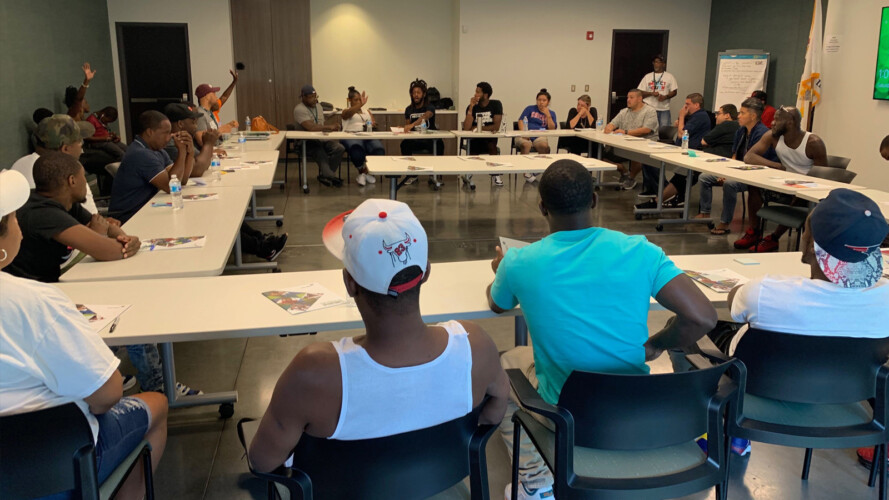 Chicago’s returning citizens bridge the gap between race and justice

One could argue that, in a world continually marked by division, there’s something approaching a universal appeal about the perfect summer day.

On this particular one in Chicago – a high-70s, lightly breezy, blessedly crisp Saturday – the North Lawndale community is taking full advantage of weather that feels like it belongs to mid-September rather than early-August. By 10:30am, the long, grassy blocks of South Independence Boulevard are already dotted with smoking grills, groups of cheerful kids, and neighbors chatting while lounging in lawn chairs. In other words, it’s not the kind of day you want to spend inside.

But just down the street from the summertime celebrations, a big room in the UCAN community center – a local youth-focused institution celebrating its 150th anniversary – is filling up much faster than expected.

It’s the third of the Upswell Accelerator’s focus groups. Each one is designed to explore the possibilities for a racial equity framework in Chicago with a specific audience that has a major stake in the end result. This audience consists of returning citizens – individuals who have been involved with the criminal justice system.

As people enter, it becomes clear that this isn’t a group of strangers. They exchange hugs, ask about family, and argue about the outcomes of the meaningless NFL preseason games a few nights prior. There’s an obvious sense of respect – for each other, for the community space they’re in, and for Mike Simmons and Xavier Ramey, the two Upswell organizers who called everyone together.

For Mike and Xavier, the respect is clearly mutual. With the charge of ensuring that the right voices are contributing to the racial equity framework, the organizers approached this audience in a dignified way. “Returning citizens” isn’t a term you often hear in the media or in legal briefs – or even in casual conversation. But that frame sheds the negative connotations of its alternatives and replaces them with agency and purpose. The life of every citizen, regardless of context, comes with rights, opportunities, and duties.

With all the seats at the table taken and the chatter dying down, Mike finally stands up to welcome the group. With a smile, he scans the multigenerational group of men and women. And just as he opens his mouth, the door opens and two more folks shuffle in. It’s a welcome interruption that repeats itself frequently over the first fifteen minutes or so.

Mike kicks things off by acknowledging the opportunity cost of joining a focus group on such a beautiful day. “I know there’s a lot of other stuff people could be doing today,” he says. “We really appreciate you being here.”

To break the ice and remind everyone that the rest of weekend awaits them in two hours, he asks each person to say where they’re from and what they are looking forward to doing later. One man leans forward to say that he’s excited to spend time with his kids and take them to church on Sunday. Another beams as he talks about the home that he and his wife just purchased, which requires a lot of work (and that’s part of the fun). A middle-aged woman elicits a few cheers when she emphasizes that she’ll be attending not one, but two parties.

Then a man who, if appearances can be a fair assessment of anything all, is probably the youngest in the room, says in a tone that borders on a whisper, “I’m just trying to see Monday.”

More than a few heads nod in agreement, but the room is quiet, suddenly drained of the enthusiasm that fueled the group for the few minutes prior. The quick shift to a somber mood seems appropriate though. Not only because of the jarring articulation of this young man’s existential tenuousness, but also because the work of the next 90 minutes does demand intensity and seriousness.

Kicking things off in earnest, Mike passes around post-it notes and poses a question: how have your life experiences been affected by racism in Chicago? He asks everyone to jot down some kind of reflection – a memory, a feeling, or maybe even a doodle or song lyric.

The first person to share is a woman who says that she didn’t experience racism much growing up – a seemingly common feeling among participants that gets unpacked as the day goes on – but she sees it in her son’s life. Recently, on a final visit to sign papers at a new apartment, she brought her son to see his future home. The property manager looked at her son and requested to see his report card. Incredulous and furious, she left – and left behind the new apartment, too.

The next few people focus on experiences they had in the justice system. Dressed in Miami Dolphins colors, a man who had earlier been jubilantly talking football starts to visibly tremble as he recalls experiences in court. The white people in front of the judge, many of whom had prior convictions, were able to talk their way out of court. On his turn at the bench, as a first-time offender, he was hushed by the judge and then quickly shuffled off to be processed.

“They were targeting our futures. The white kids got away and we didn’t,” he says. Then he adds, “Once you have that felony on your background, everything goes downhill from there.”

A handful of people lament the behavior of police officers who they feel are just looking for an excuse to arrest them. A common experience is to be thrown in a squad car and taken to the station simply for being seen in public with others – no crime committed, just unwarranted suspicion. Mike jumps into explain that after September 11, “anti-gang” legislation was passed into law. It says that people can be detained for walking in groups. Of two.

Not everyone shares what they wrote, but some of the unspoken notes, left behind on the table, speak volumes. One reads, “Been locked up for something I didn’t do.” Another says, “Lack of opportunity and exposure.” Still another says, “Racism could be as simple as me speaking to somebody in a certain area and they don’t speak back.”

Mike circles back to some themes he heard – that social segregation in the city plays out in prison, that racial bias dictates both arrests and sentences, and that some laws, like the anti-gang one, are written in ways that intentionally discriminate based on race.

The last point starts the next conversation: how do the people who create these laws get (and stay) in power? And shouldn’t laws be easier to change?

A man in a navy polo and jeans raises his hands and offers a day-defining perspective, one that returns to the experience of the woman who didn’t think she faced much racism growing up.

“All of us have the same stories we can tell,” he says. “For the longest time I was bitter and angry about what happened to me. It wasn’t until a few years into my [sentence] that I learned about systemic racism, how once the wheel starts turning, it doesn’t stop. We have to be rooted in these conversations so that we can effect the change we want to see. By now, we should have a seat at the table. But we don’t.”

Everyone else listens intently. It’s a notable divergence from the first focus group where people’s enthusiasm led to lots of voices competing. Here, there’s an abundance of patience.

When the man in the navy shirt finishes – after an aside about how he missed the tech boom in prison and had no idea how to apply for a job online upon his return – another man in a baseball cap picks up on the point about systemic racism.

“We assume that people know what racial injustice is. But if you asked 100 black people in Chicago if they’ve been affected by racism, [90%] of them have no idea what you’re talking about.” They don’t understand the history of slavery, he says, or the legacy of the civil rights era. They simply have no idea what’s happening to them.

On the subject of history, one man, who seems older than many, but surprisingly young for his comment, says, “My great-grandmother, who I touched and held, was a slave. Slavery was not that long ago.”

He emphasizes that the system of laws in which we’re living is overshadowed by still the fresh wounds of slavery and segregation.

Mike tells the group that this was a common theme for the other two focus groups. Then he asks if anyone else has something to contribute before the conversation shifts towards solutions.

One of the first people to arrive – and also one of the very few who haven’t yet spoken – raises his hand and hesitantly identifies himself as a Latino. “I don’t like using the word ‘Latino,’” he says, “because that’s a term imposed by white folks.”

Then he carefully details the ways that colonialism has permanently scarred his community, too. “There’s a forgotten history of Latinos,” he tells the group. “In Texas, there were as many Latino men and women hanged as there were [in the black community].”

Mike checks the clock and realizes that time is running short. He organizes the room into three smaller groups, each one charged with agreeing on one actionable way that Chicago’s leaders can work with the community to address racial injustice. With so many challenges already raised, and so many unrealized opportunities to consider, asking the groups for consensus might seem like a futile task.

But with a final burst of energy and determination, everyone rises to the occasion:

Mike looks at the clock. One minute to spare. Flexing his facilitator muscles, he sprints through a recap of everything that’s been discussed. And as the clock strikes one, he fulfills his promise to respect the time of the people who paused their weekends to contribute to this vital project.

His timeliness is obviously appreciated, because the room clears quickly. As it does, you can feel the buzz of energy. Maybe it’s the weather. Or maybe it’s the realized potential of a what’s possible when we work together.