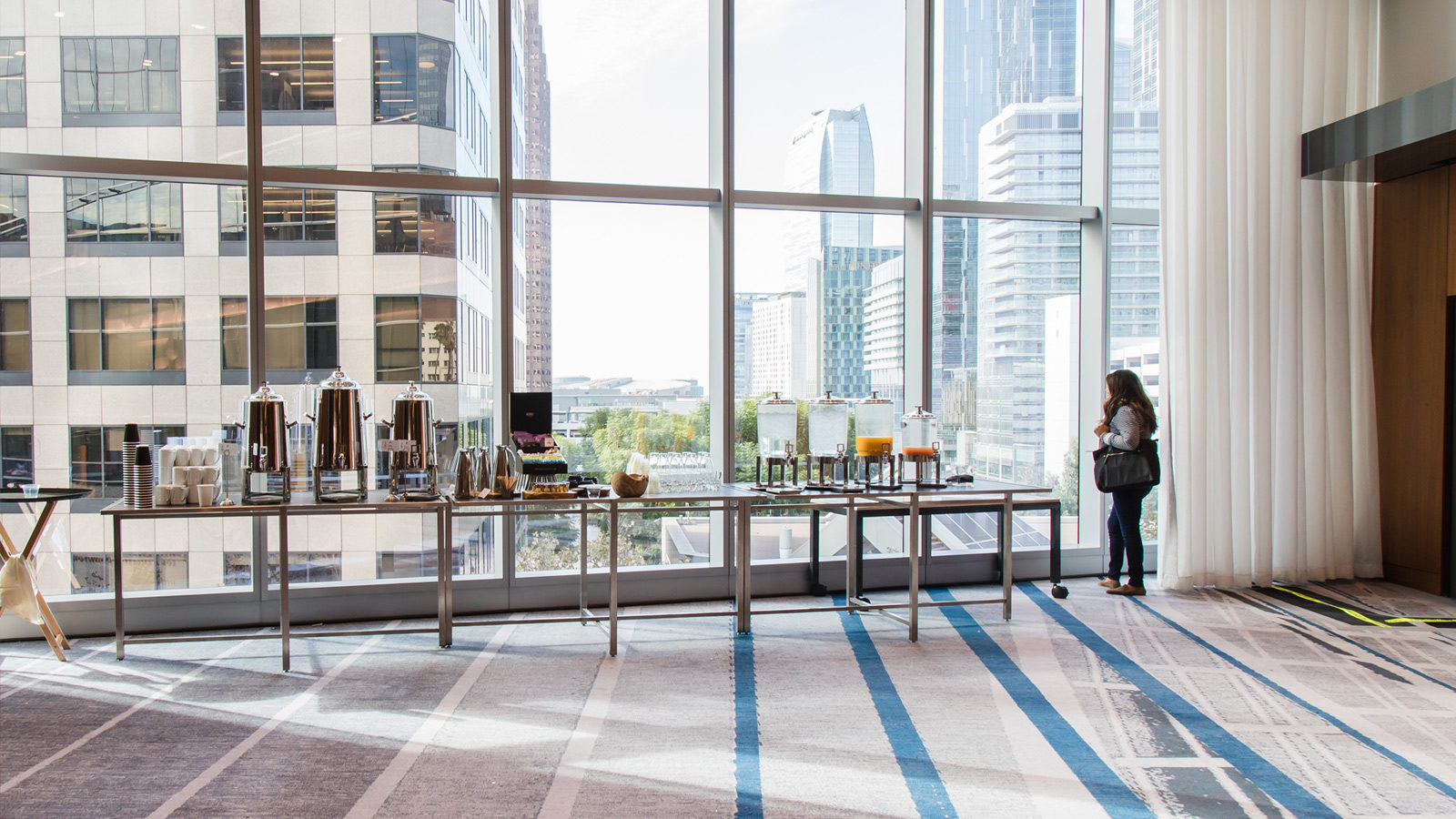 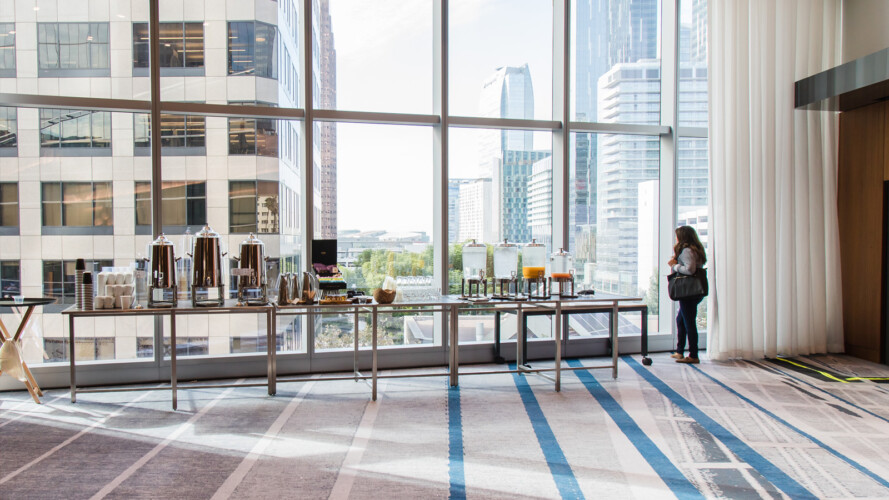 Breaking the mold and thinking outside of the box can sound like hollow platitudes in the social purpose space. We hear them all the time. Heck, we probably threw those words around in our own attempts to describe Upswell in the early months of planning. It was our first time organizing it. We couldn’t know exactly how it was going to look and feel until we were there.

Liz with colleagues Habib (left) and Tyrone (right) during IS’s 2017 conference in Detroit.

Whether or not we succeeded in breaking from the norms for an event like this, we did take very seriously the challenge of designing an atypical experience where people could meet and learn and share—all in a way that would feel organic. We hope that bore out. But, having one of these events under our belts now, we know that interesting content and a good turnout only go so far. Liz Culkin can attest to that.

Liz is Upswell’s Organizer in Chief. Upswell LA was far from her first rodeo. She has led the planning and execution of six Independent Sector annual conferences prior to Upswell. She’s been in the event planning space for decades. She can speak as well as anyone to the significance of using an event space thoughtfully. And yet, even for this event planning veteran, Upswell presented new and exciting challenges. Here’s a look at some of them.

1. We booked the location before Upswell existed…and before the hotel was built.

We’re not condoning this as a best practice but it’s true! In our case, the contract for a convening was originally signed with the expectation of hosting Independent Sector’s 2018 annual convening there. In the intervening years, construction on the hotel concluded, it opened its doors to guests, and we sunset the traditional IS-branded conference. Just goes to show how much can change in a few years! In Liz’s time, it was the first time we’d ever chosen a hotel for an annual convening without seeing it first. Turns out the Intercontinental was a heck of a space to be locked into when planning for Upswell began.

“It wasn’t until December 2017/early 2018 that we began looking at the space with the new Upswell format in mind,” Liz said. “That vision was still in its infant stages, but we knew the InterCon was a good fit for being creative because of its unique spaces—two outdoor terraces, for example, plus lots of natural light and open areas.”

2. We wanted the space to evoke a sense of community. So we had to build it from scratch.

The only aspect of the Upswell space concept that had a precedent in the old IS conference format was the workshop space—traditional hotel meeting rooms. The rest were all designed from the ground up. That includes two elements that we knew we needed to pay special attention to. First, the Main Stage. “We had toyed with doing a circular stage for the plenary sessions back in 2016 when we had a town hall program,” Liz explained. “So for a few years now, we wanted to try something different with the stage. The circular stage made sense for Upswell because we wanted to tap into a sense of community. Coming together around a circular stage felt more intimate.”

If the Main Stage was the cornerstone of the Upswell LA experience, the Public Square was the bedrock. The idea of an open-concept event format has roots in a long period that included four  IS staff members participating in a month-long residency in 2017 at a design Lab in Detroit. In subsequent months, other program and event planning staff at IS became familiar with concepts of human-centered design, and the core element of the Upswell program that came to be known as the Public Square began to crystallize in early 2018. “We started brainstorming about how to theme the space we had and the Public Square idea emerged,” Liz said. “With that theme, it became easier to think about how we could transform the space—thinking about things like cafes, bookstore, park spaces.” 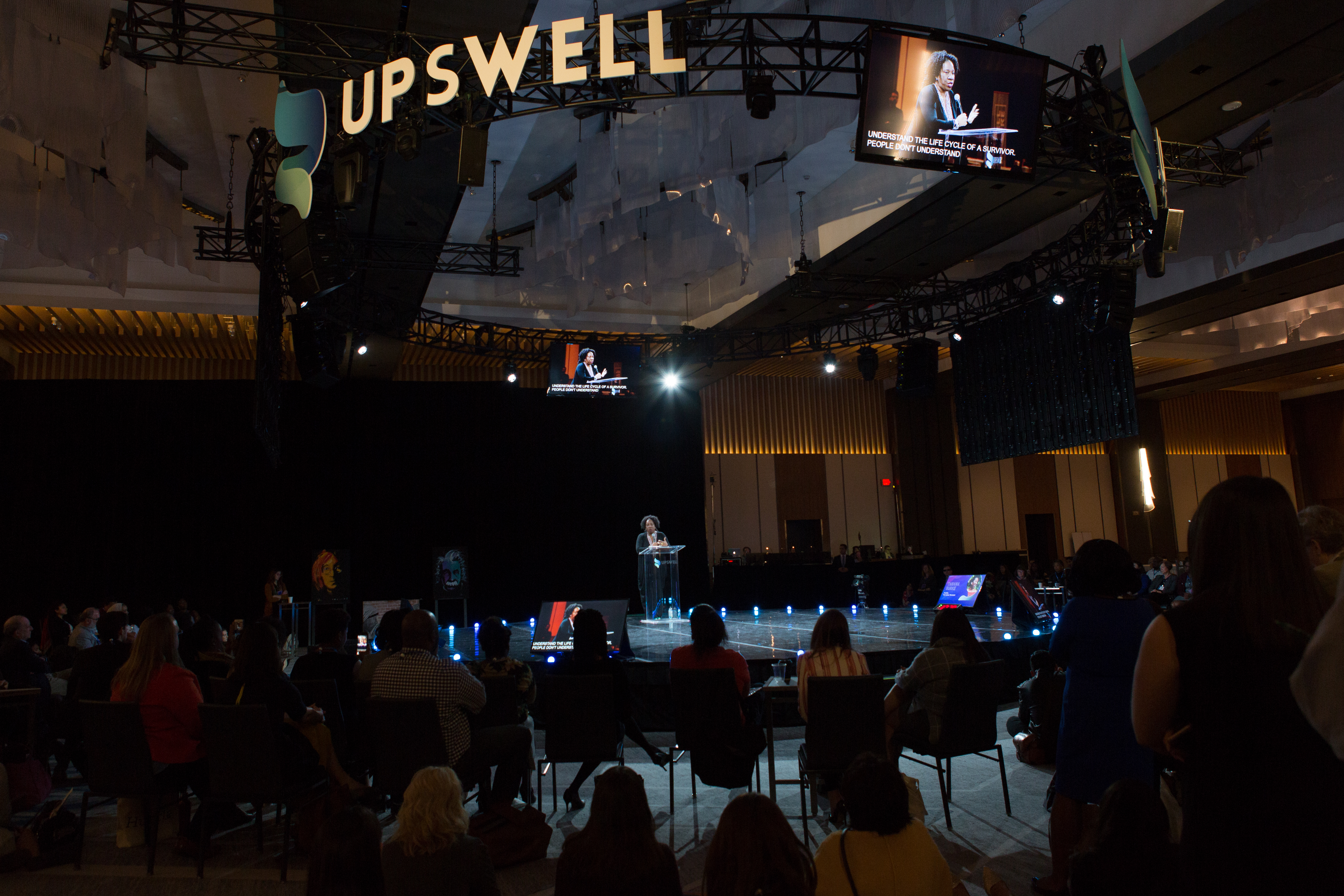 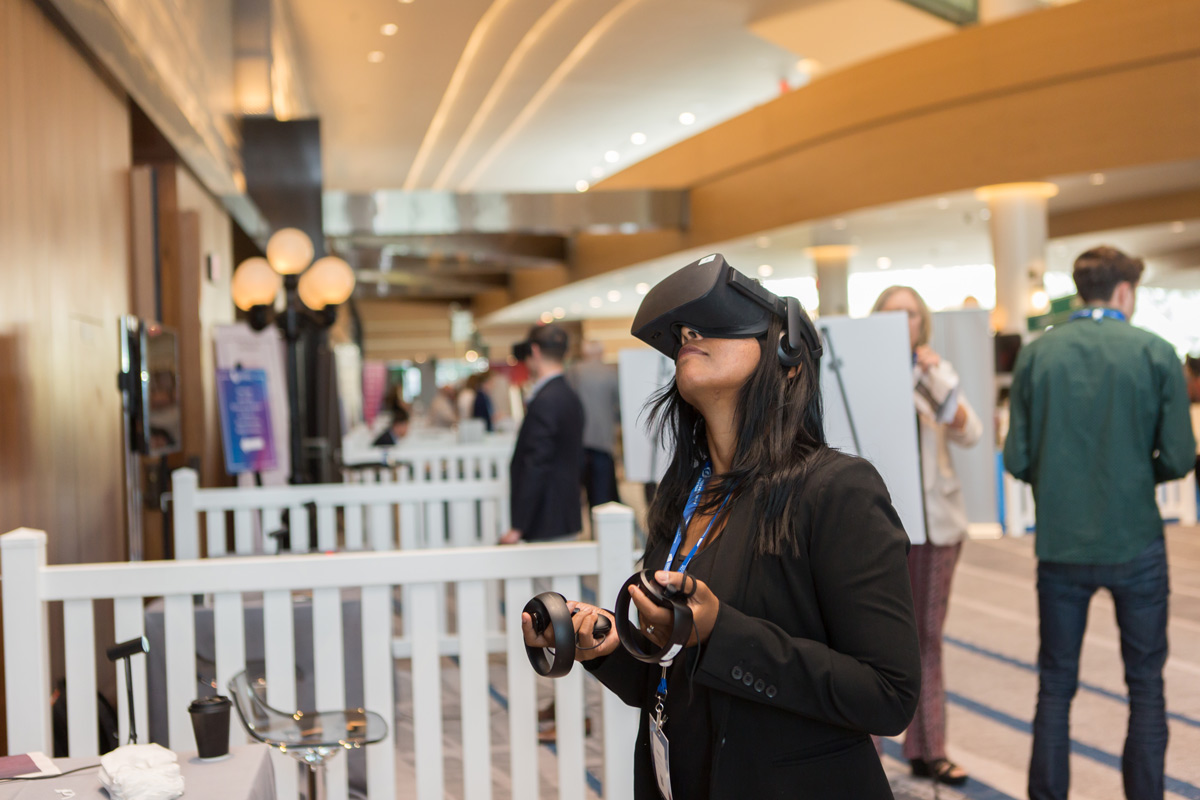 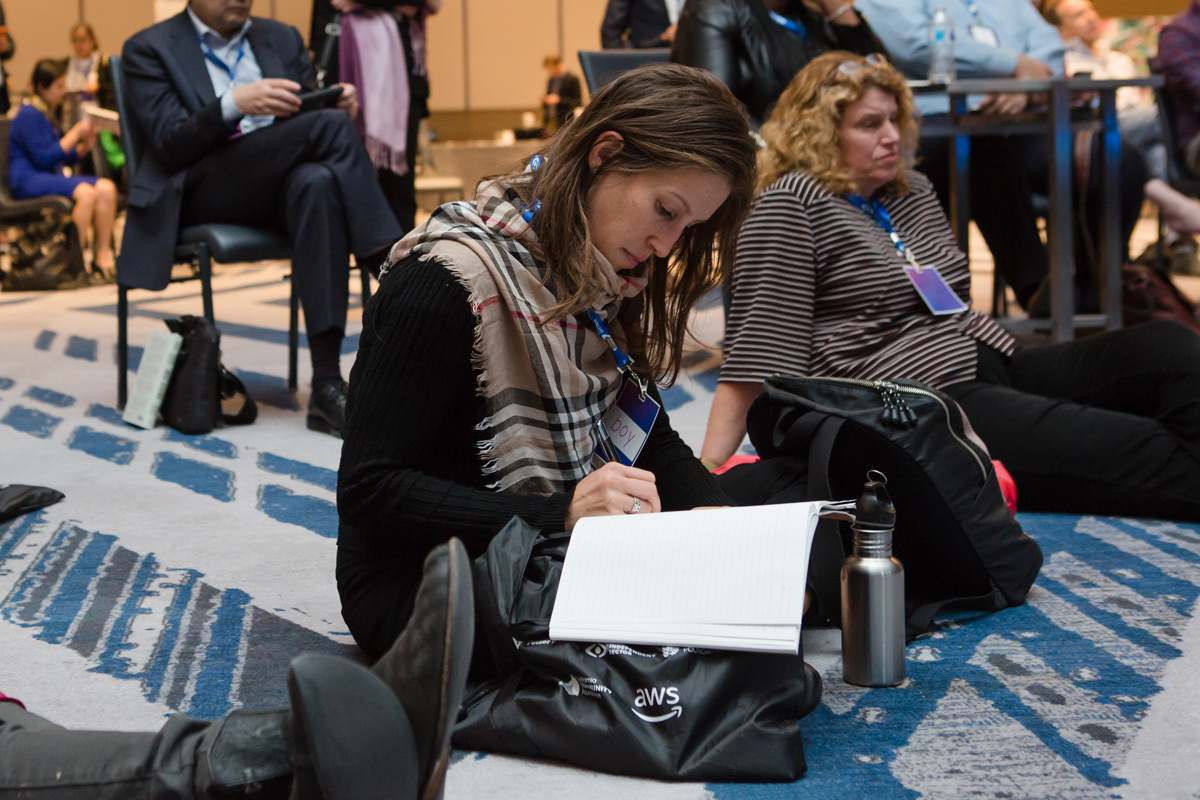 Although physical construction on the hotel had concluded months before Upswell LA, Upswell was—in a sense—open during construction. That is, we launched registration with a whole lot of planning still to do. We were pretty anxious about it (to say the least). But flux and uncertainty are part of creating something new, and to a lesser extent, part of creating something organic. Those were constraints we had to consider while designing the Upswell experience.

“Once we defined the activities and how much physical space they would need, we were able to start laying out an actual floor plan and what resources we would need in each area,” Liz said. “Most decisions were intuitive because we were already into summer 2018 and didn’t have the luxury of time to research/brainstorm ways to decorate the space.”

4. Budgets are a thing. So are a la carte menus.

Another constraint that surprisingly accelerated a lot of intuitive decision-making was cost. “There are so many cool ways we could have transformed the space, but so much of that comes down to dollars,” Liz said. “We started with proposals from outside vendors that were ten times our budget.”

But Liz is a pro, and not one to overlook the a la carte menu. She got creative. “We began a process of selecting certain elements from each proposal, negotiating the costs, and brainstorming with these companies on how we could achieve the same atmosphere but use more economical décor,” Liz said. One product of the process was the white picket fencing in the Public Square. It gave us the public outdoor space feel we were going for at half the cost of having green grass hedges, which was the first option we considered.

5. Integrating traditional elements into a new layout was a puzzle.

We mentioned earlier that the workshops staged in standard meeting rooms comprised one of the few traditional conference-format elements that we then had to integrate into a new space design. Another was exhibit space. Upswell’s predecessor, the old IS annual conference, always featured exhibitors. Typically, they were assigned to a self-contained space like a trade show hall. According to Liz, planning exhibit space in the case of Upswell wasn’t as straightforward. “In the beginning of the planning, the easiest decision appeared to be on how to set the exhibitors,” Liz said. But that changed as new elements came into the Upswell orbit.

“Due to the logistics involved with program timing and the physical space required by the new activities (i.e. the Immersive Arcade), determining exhibit booth locations really had to wait until the other pieces of the puzzle came into shape,” Liz said.

As the community outdoor space concept suffused the physical design throughout, it also gave rise to alternative ideas for exhibit booth décor and identification. Ultimately, we settled on white picket fencing to separate the exhibitor booths, and a stand with a hanging ID sign to mimic road signs.

All said, a lot went into the space design for Upswell LA. It was rewarding when it all came together. And some folks really responded to it. One attendee even approached Liz and asked her about the space design—her staff was toying with new ideas for their own convenings, and she wanted to brief them on some of what she saw at Upswell. But, of course, Chicago is not LA. This is something that we’re already thinking about. “Our space in Chicago couldn’t be any more different than what we had in LA,” Liz said. “We go from a brand new open and light space in LA to a very traditional, landmark hotel in Chicago.”

It means that a successful space design concept that serves the Upswell program in Chicago is going to be different from what worked in LA. It presents yet another new and exciting challenge for us, and a lot to look forward to in the runup to Upswell Chicago.