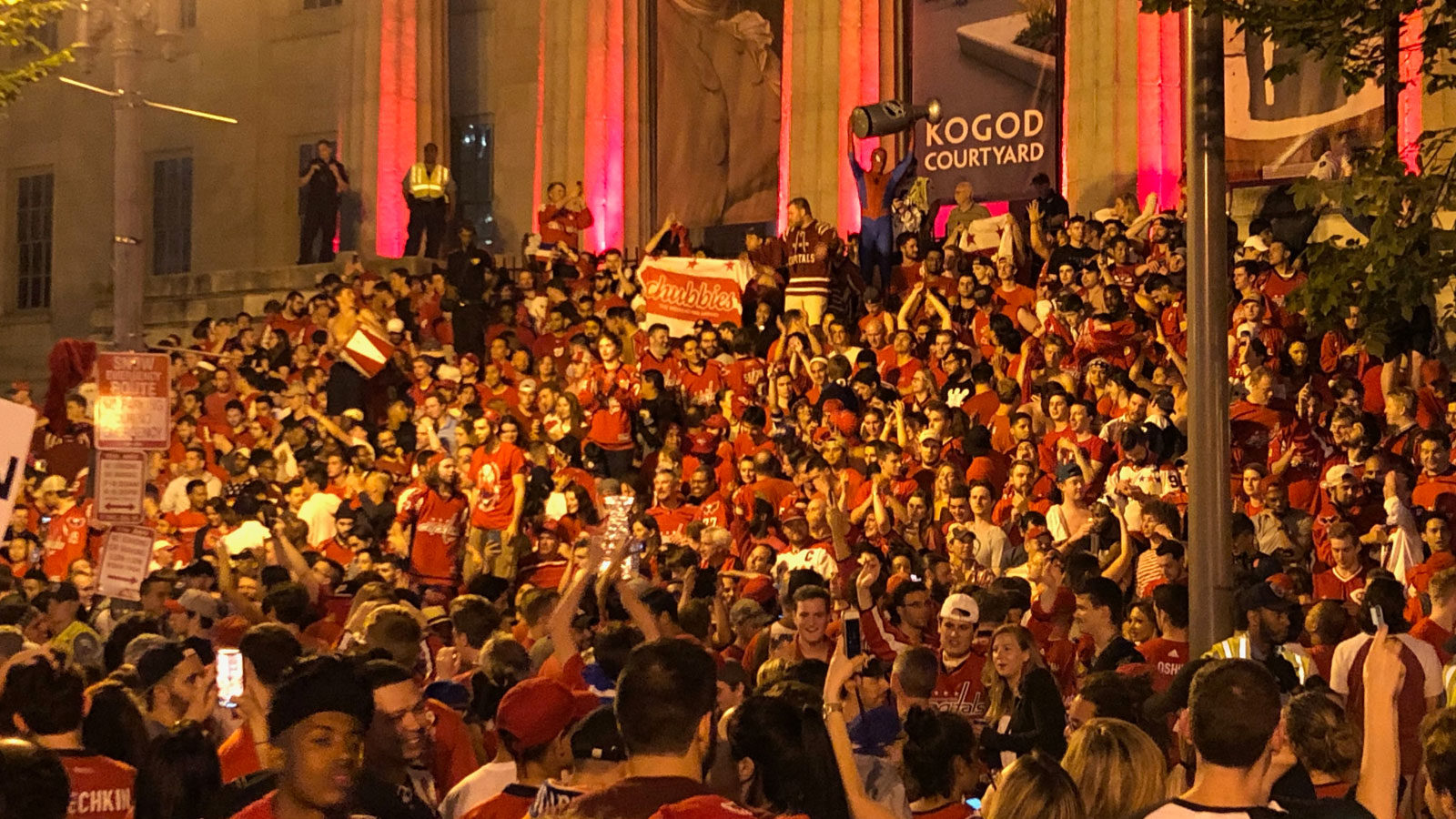 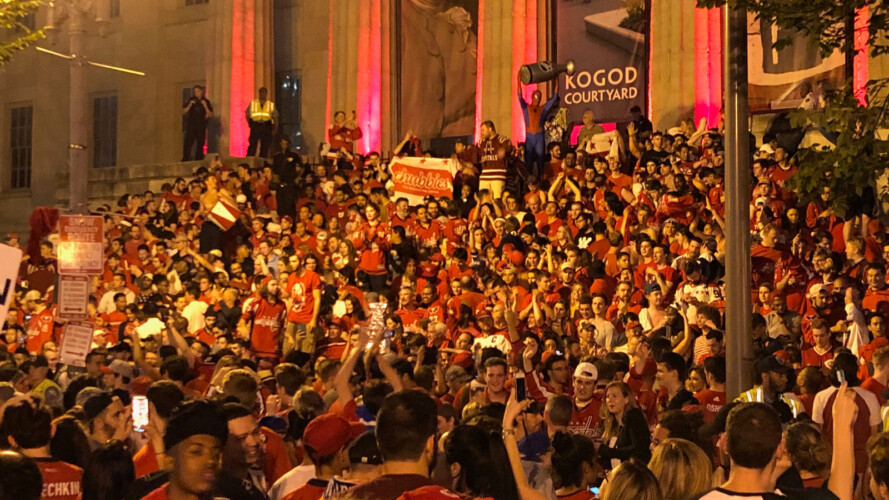 I also think it was one of the best nights of a lot of peoples’ lives. And, not so coincidentally, it was the night I began to truly believe everything we’ve been saying about Upswell.

A little bit before midnight, forty-four years after they joined the NHL with the worst season in league history, the Washington Capitals finally – finally – won a Stanley Cup.  It’s kinda pointless to try describing what it feels like to be a long-suffering fan. If you’ve been one – or, I am sorry, are one – you get it.

On one end of the spectrum, I could tell you about the $5 tickets and near-empty arenas of many years past. On the other, I could share countless early autumn curses, masquerading as headlines, that promised this would be the year for the Caps. I could describe in agonizing detail how it feels to be a regular season juggernaut that spectacularly breaks apart in the playoffs. Or, armed with a robust arsenal of profanity, I could describe the soul-crushing experience of losing to the Pittsburgh Penguins in the second round of the playoffs…many times over.

But that’s not the stuff of life-affirming experiences.

Instead, rewind to September of 2017, a few months removed from an early departure out of last year’s playoffs, thanks to the flightless birds of Pittsburgh (and what good is a bird if it can’t fly?). At the start of a new season, the Capitals were in a thick and unsure fog. Something – maybe everything – wasn’t working. Alexander Ovechkin, DC’s favorite Russian, fielded a reporter’s question about expectations and replied, hilariously and sincerely, “We’re not going to be suck this year.”

It was a tentative optimism, grounded in the confidence of many historical successes yet limited by the lack of a clear path toward the ultimate destination. And, fittingly, the season was a wild experiment, as messy as Ovi’s English. There were lots of tests to determine what was working and what wasn’t. There were major successes celebrated and failures that still propelled us forward. There was excitement and skepticism, tension and confidence, veteran heroes and rising stars. We even had the first Australian NHL player – and he scored in his first game! Then, as the regular season drew to a close, the pieces suddenly started to fit together.

Oh – that last paragraph is just as much about Upswell as it is about the Caps, save for the Aussie who literally bounced like a kangaroo when he netted his first point. We’re at the point with Upswell where things are really starting to fit together.

And where are we headed next? This is where the story gets great.

After a few bumps in the ice in the first round of the playoffs, the Caps powered their way into the second round. Against the Penguins. For the third year in a row. I could write an entire book about that series, but the key point is that the Penguins (yuck, I’ll stop writing that word) were one of the biggest obstacles in our way – mental and physical. We defeated them on a Monday night in May and, suddenly, the real upswell began to form.

To that point, I cheered for the Caps with my core people. My parents, siblings, girlfriend, and I have been watching games together for years. When I wasn’t yelling at (or cheering into) my television, I spent a whole lot of evenings in the Capital One Arena with rugged, faithful fans. It was comfortable and familiar.

But when we entered the third round of the playoffs, when we broke into territory that had been unvisited for exactly two decades, that core began growing. Exponentially. On the road for Upswell Labs, my colleagues – loyal fans themselves – and I got to share the rising energy together. That series ran to a nail-biting seventh game on the road in Tampa and the Capitals management, paying attention to the swelling fanbase, opened Capital One Arena for a viewing party. I got off the plane from the Upswell Lab in Detroit and went right to the arena, expecting a section of a few hundred dedicated fans to share the game with.

14,000+ fans showed up to watch the Caps extinguish the Lightning in Game 7 of the conference finals.

I’ve been to some spectacularly loud games at the arena. This was the loudest, by a huge margin, and the home team wasn’t even home. In the streets after the game, stunned thousands swirled in unison and chanted, We want the Cup! I lost my voice and quickly replaced it with a feverish ringing of my Capitals cowbell. The unthinkable was quickly becoming possible.

Local businesses and national corporations alike decorated their windows with rally signs. The players’ faces featured on banners that hung from street lamps across the city. I was lucky enough to see John Carlson smiling at me as I left my apartment building each day. In bars, parks, and homes throughout the region, viewing parties gathered fans old and new. One of my friends, a fellow DC native, welcomed everyone to the Caps community with a post that read, “Every sports dynasty began as a bandwagon. Hop on board!”

On the night of the fifth game of the Stanley Cup finals, the Capitals somehow led the series 3-1. All the energy that had been building for weeks in places familiar and unexpected surged into Chinatown, DC. Again, it was a road game. Again, the Caps had opened their arena for a viewing party. About a week removed from the viewing party that attracted 14,000, a massive 70,000 fans tried to attend. The arena was over capacity. The surrounding streets were filled with tens of thousands of fans who watched the game on open-air jumbo screens.

I watched five blocks away in my apartment with my parents and sister. The game was electric, the Caps came from behind to lead in the final minutes, and with a few seconds left on the clock, I opened my window. When the final buzzer sounded, the air exploded with the happiest noise anyone has ever heard. A roar (and road) of cheers. Every car on the street honking. Neighbors celebrating up and down my apartment hallway.

My family savored the moment. We toasted with champagne and hugged each other. My eyes welled up, embarrassingly and proudly, with tears. So many years prior, a similar and smaller evening had ended with a deflated sigh.

When my parents left, my sister and I ventured into the massive celebration. Have you ever hugged a police officer? On June 7, I did. And I hugged a lot of other strangers, too. My sister and I high-fived every person we could. People chanted We won the cup! On a stage in the middle of F Street, the Capitals’ local commentators glowed as they delivered news that often seemed like it would never come.

The scene was surreal and glorious and euphoric. For a precious few moments of our lives, the weight of the world was lifted from every one of our shoulders.

And one of the best parts? It didn’t end that night. The Friday morning commute was filled with smiles and Ovechkin jerseys. I got another hug from a stranger, in the middle of an intersection at 16th and L Streets with the White House behind us. Over the weekend, the Capitals players celebrated together across the city with the Stanley Cup itself in hand.

The team even took the Cup swimming in a fountain in Georgetown. It reminded me of a changemaker in Detroit who told us that the best professional event he had ever attended included a big group of attendees skinny dipping in Lake Michigan. Don’t worry, that’s not planned for Upswell…

My family, including a virtual appearance from my brother in Boston. Not pictured: my other sister and my Penguins-loving brother-in-law who live outside of Pittsburgh. My girlfriend picked the worst week possible for a foreign work trip.

All of this – the kindness between strangers, the shared identity, the sheer determination, the ground-shaking energy, the hard-won joy and, most importantly, the thriving and ever-growing community – is what I believe Upswell can create for the world.

I get that changework isn’t a game and I’m not trying to offer some cliched sports metaphor. What I do want to share is that, during this playoff run, I had an experience that I didn’t even realize was possible – and now I think I can have it again, maybe in LA this November.

Each of us who is dedicated to improving our communities is a kind of long-suffering fan. Our prize is a better society and, while we’ve made progress and even been on the verge of success, we haven’t won yet. I think Upswell is how we win.

I believe, quite literally, that changemakers of every kind can create the sort of life-affirming – yes, even life-changing – experience that the Caps fans created with and for each other this year. Actually, I believe that we can create something even stronger, because as much as I love my team and city, there are a heck of a lot more changemakers in the world than Caps fans.

One last thought before I go toss a load of reds into the laundry. A few hours before the big victory, ESPN published a story titled Why hockey players don’t say ‘I’. The author points out that the NHL’s identity – which shows up in its players and fans alike, I think – is grounded in “selflessness and unwavering commitment.”

That’s something worth remembering for Upswell. Because, as the old saying goes, there’s no I in team.

But there is a we at the heart of Upswell.